Click here to edit the Social Media Links settings. This text will not be visible on the front end.

What is Row House Architecture?

Of all the alternatives to single-family detached homes that remain popular today, row houses may have the longest history. Some of the oldest and largest cities on the East Coast such as New York City, Boston, and Philadelphia still have row houses in great numbers. These iconic structures have served as the backdrop for some of America’s most beloved TV shows, including Full House and Cheers. Given their storied history and prime location, row houses represent the best of the past and the present in home design.

Since their beginning in the early 1600s, row houses have presented an economical solution to housing for home builders. They allowed builders to divide a plot of land into different living units that increased the number of tenants on the property. In the 19th and 20th century, the easy-to-build and inexpensive nature of the housing style fit the building demands of the era, and they proliferated throughout what are now some of the country’s most popular metropolitan areas.

Difference Between Townhouses and Row Houses

Both types of housing may be governed by a Homeowners Association (HOA), which lays out guidelines for property upkeep and maintenance, enforces restrictions on making addition/remodels, and charges monthly fees that go toward the community’s shared spaces, property maintenance, and amenities.

One well known variety of row houses is the “brownstone.” As the name suggests, brownstones’ signature exterior is a mixture of sandstone that produces a dark brown color. Brownstones are commonly found in historic districts throughout New York City, such as Brooklyn, Manhattan, and Harlem. 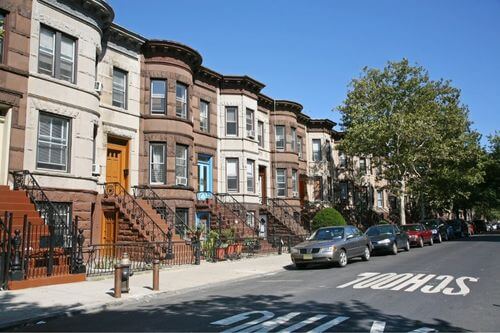 Row Houses and the “Missing Middle”

Row houses, along with duplexes, courtyard apartments, and other similar housing types, were constructed in great numbers prior to World War II but are now far less commonly built. The term “Missing Middle” was first coined by Opticos, a team of urban designers and strategists who realized that this type of housing was largely missing in today’s market. In an episode of Monday with Matthew, Windermere Chief Economist Matthew Gardner explained how these “missing middle” housing types can improve housing affordability:

“And the key function of this type of housing is to meet the rising demand for walkable neighborhoods, respond to changing demographics, and provide housing at different price points. You see, rather than focusing on the number of units in a structure—think high rise apartments or condominiums—this type of housing emphasizes scale and heights that are appropriate for and sympathetic to single-family or transitional neighborhoods.”

Related Articles
Design Simple Garage Makeover Ideas For some homeowners, the garage is the focal point of their home. For others, it is simply a storage space or a place to park their vehicle. Regardless of how you use your garage, these simple garage makeover ideas can help keep you organized, boost your curb appeal, and increase your home’s value. Simple Garage Makeover […]
Design What is Mid-Century Modern Architecture? The mid-century modern movement’s impact on design reaches far and wide. Whether it’s graphic design, architecture, interior design, product development or elsewhere, we see traces of its influence in countless aspects of everyday life today. Mid-century modern homes are known for their signature look and stylistic appeal. Here’s a short guide to understanding the characteristics […]
Greeley Real Estate Corner Lot Home Made for Entertaining Situated on a corner lot, 1422 88th Avenue has plenty of elbow room. Between the spacious kitchen/dining area, large covered front porch, and covered back deck there is more than enough space for entertaining. This property also features an open floor plan, vaulted ceilings, upgraded finishes, newer stainless appliances, tile backsplash, and wood flooring. Additionally, […]

Thank you for your inquiry.